What is JBoss ? JBoss Application Server (or JBoss AS) is a free software/open-source Java EE-based application server. An important distinction for this class of software is that it not only implements a server that runs on Java, but it actually implements the Java EE part of Java. Because it is Java-based, the JBoss application server operates cross-platform: usable on any operating system that supports Java. JBoss AS was developed by JBoss, now a division of Red Hat.


Important notice: This tutorial covers the releases 4-5-6 of the application server. If you want to check the latest AS 7 version, we suggest you looking at the following tutorial
JBoss application server can be freely downloaded from the Community site http://www.jboss.org/jbossas/downloads/
The installation of JBoss is simply a matter of extracting the compressed archive into a folder.


In order to start up JBoss correctly, you have to define the environment variable JAVA_HOME to the location where you have installed Java.
After you have installed JBoss, perform a simple startup test to validate that there are no problems with your Java VM/operating system combination. To test your installation, move to the bin directory of your JBOSS_HOME/bin directory and issue the following command:

Let's have a look at the application server folders for the releases 5 and 6:

Here's a description about the single folders:

JBoss 5 and 6 ship with a set of pre-built server configurations. Most of the time you'll need to use the "default" configuration for single node applications and "all" for clustered applications. Here's anyway a description of each configuration:

This is the basic JBoss configuration containing a default set of services. It has the most frequently used services required to deploy a JEE application. It does not include the JAXR service, the IIOP service, or any of the clustering services.

The standard folder hosts the configuration that has been tested for Java EE 5.0 compliance. The major differences with the other server existing configurations is that call-by-value and deployment isolation are enabled by default, along with support for RMI-IIOP and jJUDDI. .

The "web" configuration is a new experimental lightweight configuration created around JBoss Web that will follow the developments of the Java EE 6 web profile. Besides being a servlet/jsp container (and this is the most relevant difference with a pure Ttomcat  Web Server), it provides support for JPA and JTA/JCA.

This is the has a minimal configuration—the bare minimum services required to start JBoss. It starts the logging service, a JNDI server and a URL deployment scanner to find new deployments. This is what you would use if you want to use JBoss to start your own services without any other JEE technologies. This is just the bare server. There is no web container, no EJB or JMS support. This is not a JEE compatible configuration.

Inside each server configuration there's one more level which contains the configuration folders, the deployment folder and others. Here's a table which resumes the server structure:

Let's have a look at the application server folders for the release 4: 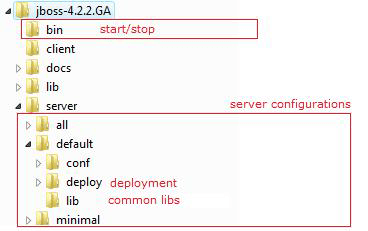 Here's a description about the single folders:
Inside each server configuration there's one more level which contains the configuration folders, the deployment folder and others. Here's a table which resumes the server structure:

Email ThisBlogThis!Share to TwitterShare to FacebookShare to Pinterest
Labels: JBoss